I always thought (and still think) that it is a kind of fear we see in Lee's face at the moment he realizes that Amanda is touching his hands while talking about Lady B. not touching her husband. 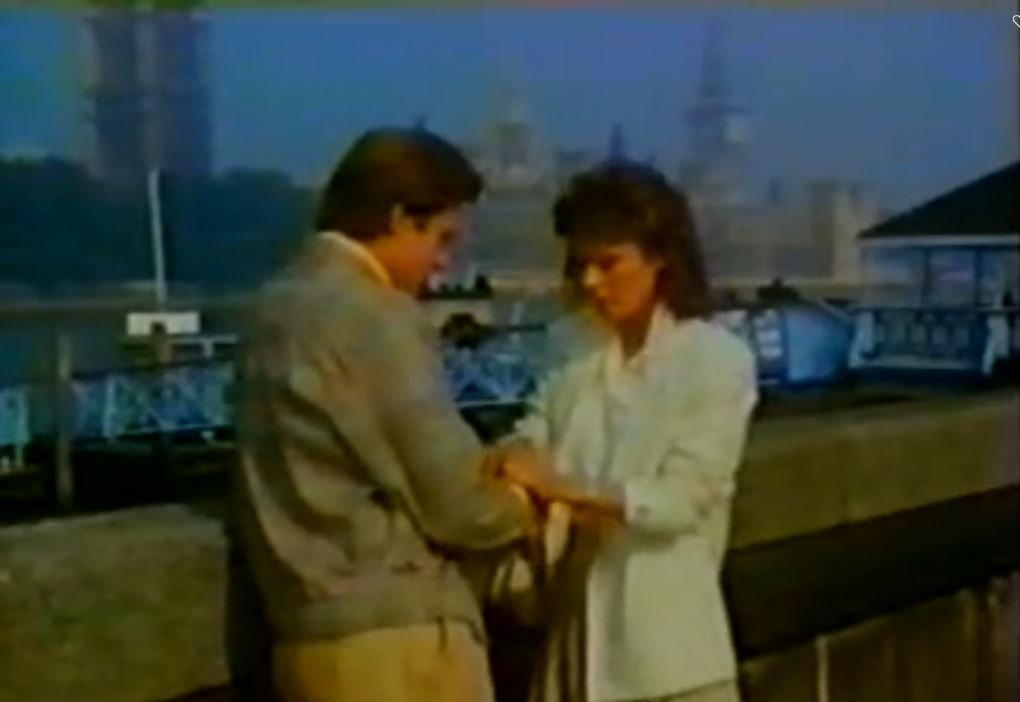 He seems a little shocked and I interpret it as a shock because of the feelings he has when she touches him, especially realizing what she says about people who care about each other. The thought must have shot through him that he might care about Amanda, more than he knew and more than he is still ready to admit to himself. I think that must have scared him to death.

Amanda, on the other hand, quickly realizes what she is doing and I think she knew that she has (accidentally) crossed a line and shown a little too much of her own feelings which she had become so good in hiding from him.

Maybe Lee knew that Amanda was a little attracted to him. And why not, he must have been used to this. He knows darn well how handsome he looks and that he has this kind of affect on the ladies. But he also knew that she would never act on it, that would have been totally out of character for Amanda. But at the same time this must have been a totally new experience for him: A woman who does not treat him as all the other women he dated surely do. No, on the contrary, she strictly refuses being too close or even alone with him, especially at night, although it would have been business. She doesn't want to share a bed with him, not even a room. He must have been confused by this fact but he respected her and her principles from the very beginning, even though he sometimes was a little annoyed.

Now the question of the questions, and I could talk about this point for hours and hours, days and days ...

When did the fall for each other?

I think Amanda had a crush on him from the moment she saw him in his tux on the stairs in "The first time". Maybe even before, because remember, she put a little make-up on which she hadn't done for so long that even her boys didn't remember. This means she didn't put make-up on for Dean either. Hmmm, what tells us this?
Her feelings were far away from real deep love at this point, but they grew faster than his and steadily. But she knew that even this little crush would lead her to nowhere because she knew what kind of man Lee was.

Nevertheless she stood by him and didn't want to lose him, because there were these tiny little moments when she got a glimpse behind the walls he built up around his heart. She knew there was more about him than what catches the eye. She liked him and wanted to be his friend. Maybe because she understood very early that he was what he was because he didn't have any (or at least very few) true friends.

I find it interesting and impressive that Amanda never lost her head during these first - let's say two and a half years, in which she could never have been sure about what his feelings really were for her. She stood by him, never letting him down, even though he often treated her badly, scolded her, yelled at her, wanted to get her out of the way (mostly in season one). But only this way she was able to not only gain his frienship but also his complete trust. Before he knew her he never had trusted anyone, maybe except for Harry Thornton and Billy. I mean this complete trust to "follow her through a blizzard at midnight". I love this metaphor!

Conclusion: I think Amanda was well aware of her growing feelings for him and they started right from the beginning.

To Lee it was very different. He had to go through a lot before he realized that it was love he felt for this little housewife from Arlington. Although I think there was a kind of attraction from his side either, even at "There goes the neighbourhood", which we can see in the scene in the kitchen (handshake) and in the tag, when he watches the wedding ring, smiling and obviously thinking of Amanda. And I think he didn't realize that it was an attraction. This was so far way out of his universe that he never could have imagined something like that.

But (!) he very early began to feel a deep kind of protectiveness towards her and he often acted kind of possessive when it came to Amanda. He even got jealous very early in season one ("Service above and beyond", "The Mole") and angry (about himself) when Amanda realizes his "acting like a jealous person" and tells him to his face. I love these scenes because he always ist so shocked hearing her telling him he looked/sounded jealous. He didn't want to be jealous! But he was. And on went the confusion for him. How could he be jealous? This was only Amanda, the frumpy housewife from Arlington! I wonder how often he might have had this thought ...

I think he startet to fall for her during "Service above and beyond". His face while he steps down the stairs towards Delano is that of a man who cares very deeply for that woman. Of course this is much to early to talk about him realizing or understanding what is going on with him. He took very long to get to this point.

And I agree with those who said that it was during "Burn out" that he realized what a treasure he had with Amanda. A "one-in-a-million". He was so impressed that she forgave him his slapping her face. Man, she even stood up for him in Billy's office right after he did this!!! And she trusted him completely during the shooting-scene.
For me, that is when he began to understand, that she was no ordinary friend to him, that she never had been. But still these feelings scared him, he didn't know how to handle them and what it really was that she felt for him. Remember: She had become darn good in hiding her true feelings.

And it took him another year (and us another season) before he eventually was ready to admit his love to her. To himself, I think, he admitted it a long time earlier, at "Over the limit", when he accidentally called Lesly "Amanda". From this point on he stopped seeing other women and he tried to figure out Amandas feelings. And when he got sure that she felt someting for him, he tried to find a way to tell/show her how he felt. But they were often interrupted, the time wasn't right, it was not easy for him. Thank God he locked that door at the end of "All the world's a stage"!

Okay, that was a long text. I think I got a little lost in it. That always happenes when I think about the question when they fell for each other ...

I think that's what made this show so great. Two people of two different worlds meet and have to deal with each other. And the more they do, the more they realize that they have more in common than they could have imagined at first.

I think he never thought that she could have serious feelings for him. At least not during the first season. And also later on he didn't allow himself to think about something like that. I find his behaviour very interesting, because it is so complex (and fun to analyse). He pushed her away most of the time but at the same time he began to appreciate her friendship more and more and didn't want to lose it.

At the beginning he was a man who thought he didn't need love and didn't want it either. He had loved, at least once (Eva), and it didn't end well. Even worse: He had to learn that this love was not real, at least from her side, or maybe it was but to Eva he wasn't that important than she was to him. She was alwas more involved with her job than with him and would even have killed him.

So he only had these women come and go: Randi-Babys, Cyndis with and "i", Margots and so on. He might have liked them but never ever loved one of them and vice versa. Sometimes I think their only function was to keep his hormones in a balance.
Amanda now was so totally different form these women that he at first didn't know how to handle her. He might have realized that she was a little attracted to him but on a personal level he never took adventage of that. He couldn't help but like her. He knew that she liked him too, but love? Oh no, not in his universe. Nobody had ever loved him, why she? And worse: How could he even have the slightest feelings for her? A housewife, mother of two boys with a mortgage and a station wagon! I think he spend a lot of time to convince himself that he didn't want to be loved (neither by her or anyone else).

I also think that she learned after a while that this behaviour (of always pushing her away so hard) was kind of a pattern. One of the reasons she never gave up was IMO that she tried to break this pattern some day by showing him that she wouldn't let him down even if he did something that would have caused another person to go away and never come back. She teached him trust, and that was the hardest of jobs she could ever have chosen.

What a complex character development for a show that was intended just as family entertainment!