I just love the conversation between Magda and Amanda in the kitchen, especially Amanda's so very telling fluff in it:

Magda: "You have an admiration for Mr. Stetson, no? Perhaps more than an admiration?"
Amanda: "I don't know why you'd say that, I mean, we have a pers... uhm professional association and ah..."

Nothing more has to be said. 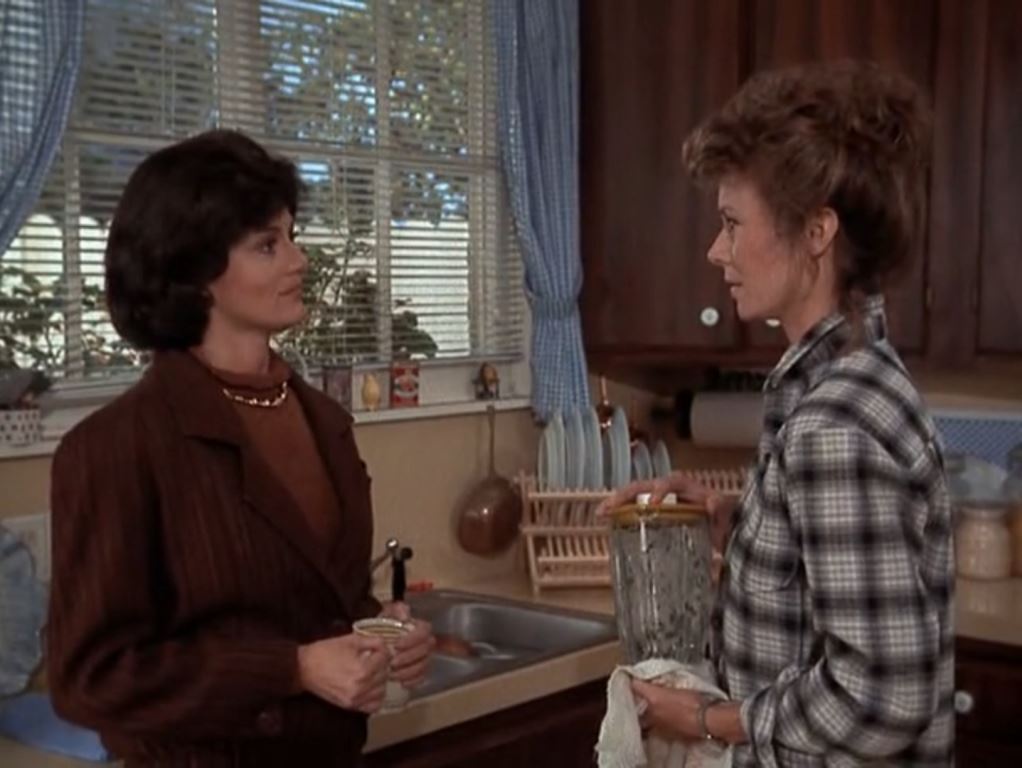 And although Lee's explanation why he rescued Amanda last was a little lame, I like that tag, too. There's such a nice flirting tone in it and Amanda looks gorgeous. I think this is one of the first times (if not the first) Lee also realizes that consciously.

Okay, here's what my body language books say about women showing their tongue while smiling/talking or running it over their teeth like Amanda does in this tag. I think you won't be much surprised:

It is a definite flirting signal, telling: I'm into you. I like you, I'd like to get closer to you/kiss you.
And watching Lee shortly before Amanda shows her tongue you will see that he is licking his lips, too.

Maybe it's a little surprising considering it is relatively early in their relationship, that suddenly both of them are in a kind of flirting mode. And Lee obviously is starting it with his talk about these things going on for hours. The way he says it can be interpreted in different ways, but to me it sounds as if he was a little coming on to her. He definitely doesn't want to get rid of her. It was his idea to bring her to the party as an apology for hurrying her out before. And maybe it was also an excuse to himself for spending time with her. He obviously realizes here how attractive Amanda is and is fully aware of her as a "woman", not only a "housewife and mother".

And listen to his voice when he says "these things usually go on for hours ..." and the following lines. It becomes a little deeper, smoother, lower. A definite flirting signal, too. Men do it automatically and most of the time not consciously. If they talk to a woman they flirt with and like to be getting closer to, they lower their voice, make it sound deeper. Another thing that comes out of the evolution/biology. The deeper a man's voice the higher his testosterone level. A sign for the female that he's a good choice as a potential partner (for procreation). Listen to Lee during all the series. He does that very often when takling to Amanda, an not only during the third season.

BTW, Joe does it, too in WWH.  But it doesn't have an effect on Amanda, because she had already made her choice then. But this belongs to another episode discussion.

I think Lee's behaviour in the tag is also a reaction caused by his statement at the beginning of the episode: "This isn't a date."
Because this time it is. Or what else would you call his invitation to the party?

Also consiering that the next episode is "The Mole" with Lee getting jealous again, we can clearly see a development in his character and feelings. There is something going on with him, he just doesn't realize (or want to know) what it really is.

In "Dead Ringer" we see this change in Lee's behaviour that clearly for the first time. Not long ago we had the story with Eva finally coming to an end for Lee. He was able to close that chapter in his life for good. And from this point on he (subconsciously) allowed himself to see Amanda differently. I think this isn't a coincidence. There were hints and signs of his feelings for her before, but differently. Here he is really and truely flirting with Amanda. And gets an acknowledgemant in return because she is flirting back.

Of course when Lee realizes that there is more about her than he would admit, it scared him to death, and from that point on he tried to ignore it or even fight these feelings.

Amanda on the other hand was IMO just reacting naturally to his flirting. She enjoyed being with him not because of a job but because he invited her by his own choice. She had his whole attention this evening and both liked very much being in each other's company. Of course she had "and admiration for him, maybe even more than an admiration". Here Magda was completely right. And maybe Amanda was giving away just a little more with her flirting signs than she consciously wanted, but as there is no awkwardness between them, it didn't harm their relationship. On the contrary, it made Lee see that this little housewife was actually a woman he was able to enjoy spending time with. Something he had'nt expected earlier in the season.
I didn't mean that he flirted with her deliberately. It was sometihing subconscious going on with him. And even if he tried to get her out of the party, he did it in a really flirting way (see my explanations about his body language). And what's even more important: He does it to her the first time. Earlier in the season he would have just said that he had to go or wanted to go. Or he hadn't invited her in the first place. But now he subconsciously uses his charm and flirting techniques on Amanda, and she reacts by flirting back. To me this whole "these things go on for hours" - "you didn't have to bring me" - "yes, I did because I rushed you out the last time" - exchange sounds very much like two flirting people, especially since Lee doesn't know that Amanda feeels that bad she wants to go home and insists on staying at the party (twice!) just until she tells him she wants to go. And when she does, he somewhat looks disappointed for a second, doesn't he?
And not to forget all the lip licking and tongue showing ...

That being said, I do agree that somewhere along the way of season 1 he definitely does start flirting with her - the tag of Waiting for Godorsky definitely has it. Maybe he was testing the waters subconsciously? What Amanda does wisely here is not fall for it - she isn't someone who goes for a one night stand and she knows that even though Lee got closure about Eva, he isn't someone who goes in for committment - for someone who is in love with someone who the don't believe is going to fall in love with them, she choses the option of working with him - it's a more permanent relationship than being a one-week girlfriend and in season 1 and 2, Lee seems to be the confirmed bachelor who only dates the Randis of the world and they don't bother Amanda in the least - she's actually amused because she knows none of them really have Lee's heart.

It isn't until Lee dates Leslie, who is so similar to Amanda, that Amanda realizes Lee has changed enough to be ready for a more permanent relationship. And from that point on, Amanda doesn't give Lee a chance to form an attachment with any other woman - it's why she gets super jealous in Over the Limit and virtually finally explodes outside his apartment (and Lee sheepishly asks her out in the tag - he got the point and his own subconscious slip of the name helped him realize how much Amanda was interwoven into his life already - which was her whole point of fighting to be his partner) and why in the “Utopia Now” tag, with a set-up virtually the same as “Ship of Spies”, she does *not* go along with the brush-off of "two cold people."